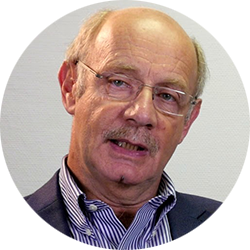 After medical school at Paris University, he attended the University of California San Diego for a post-doctoral fellowship on molecular pathology of fibrosis. Back in Paris, he was nominated full professor and director of the department of pathology at Paris-Sud University. He served as head of the Department of Pathology, Physiology, Nuclear Medicine and Imaging at the academic hospitals of Paris Nord-Val de Seine, France and was chairman of the Department of Pathology at Beaujon Hospital, Clichy, France.

During that time, he led a research group at Centre National de la Recherche Scientifique (CNRS) and then at Institut National de la Santé et Recherche en Medicine (INSERM) focusing on pathophysiology of liver diseases, collaborating with several research teams around the world for which he provided expertise in the field of experimental and clinical liver pathology. He served as a member of the executive committee for the European Society of Pathology (ESP) and then had the honor to be nominated President of ESP (2015-2017).

Dr. Bedossa is the leader of several liver pathology consortia and is the central pathologist for major international clinical trials in non-alcoholic fatty liver diseases. In 2018, he founded LIVERPAT, a company providing consultancy in liver pathology.