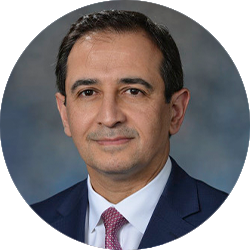 Hashem B. El-Serag, MD, MPH, is chair of the Department of Medicine at Baylor College of Medicine. He obtained his medical degree from Al-Arab Medical University in Libya, completed his internship and residency in internal medicine at Greenwich Hospital, Yale University, Connecticut, and completed a fellowship in gastroenterology at the University of New Mexico, Albuquerque, New Mexico, where he also earned a master’s degree in public health. In 1999, Dr. El-Serag joined the Michael E. DeBakey VA Medical Center and Baylor College of Medicine (BCM) in Houston, where he later became Chief of the Section of Gastroenterology & Hepatology.

Dr. El-Serag’s research focuses on the clinical epidemiology and outcomes of several digestive disorders, including Barrett's esophagus, esophageal adenocarcinoma, hepatocellular carcinoma and hepatitis C. He has obtained >55 funded research grants including those from NIH, VA and Cancer Prevention Research Institute of Texas (CPRIT). He has >520 published papers to his credit including those published in New England Journal of Medicine, JAMA, Annals of Internal Medicine and Gastroenterology. His national leadership roles included Editor-in-Chief for Clinical Gastroenterology and Hepatology (2012-2017) and President of American Gastroenterological Association (2019). Dr. El-Serag’s has been selected into the American Society for Clinical Investigators (ASCI) and American Association of Physicians (AAP).